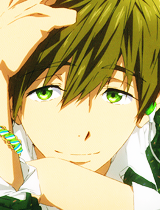 Out of Free!'s small cast, Makoto appealed to me the most from the very beginning. A couple reasons were involved—all of them pretty superficial. My favorite color is green and my favorite swimming stroke is actually the backstroke. Yes. That's it. Incredible coincidence, no?

Basic qualities aside, as I continued to watch the series, Makoto as a character began to grow on me. In retrospect, it wasn't all too surprising. After all, many of my favorite characters share similar characteristics with Makoto: they're entirely selfless and loyal and protective of those they care about. Similarly, I always tend to gravitate towards the easy-going and mellow types, partially because there's a kind of hidden restraint about them, and partially because I recognize myself in them. While I don't entirely agree with the writing in the second season, I could also relate to the insecurities he grapples with in regards to his relationship with Haruka.

In the end, I found myself identifying a lot with his character, despite what little is seen of it throughout the series. Although he's a minor character, Makoto is my favorite out of the cast—not to mention one of my favorite characters in general—so I wanted to create something special for him. After receiving some encouragement from Lethe and other Amassment pals, I began working on the site early March 2016 as part of the Dynamic Duos Challenge. Finally, it was revealed on August 15, 2016. Hopefully I succeeded!

The fanlisting portion of the site was approved by Anime Fanlistings and was opened on October 28, 2016. In February 2017, the site won the Shrine Spotlight at Amassment! 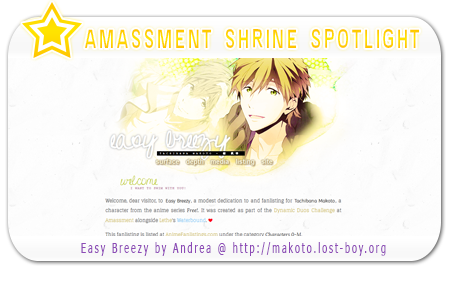 Whenever I think of Makoto, the most prominent scene that comes to mind is that moment on the beach, the morning after he confesses his fears to his friends. As the others swim their way back to the other island, Makoto gives Haruka a content smile before making his way to the sea to follow his friends. It’s a moment of incredible growth for Makoto, so it probably comes as no surprise that it’s my favorite scene of his.

At first I was thinking of calling the site “After the Storm,” referencing the storm that occurs throughout episodes 1.05 and 1.06. It didn’t really sound right to me, however, and I also thought it might be too common of a name. In the end, I decided on “Easy Breezy” to reflect the aftermath of the storm: that calm atmosphere on the beach. In addition, I also thought it conveyed Makoto’s personality well: warm, easy-going and gentle.