Another aspect of Makoto’s personality, and part of what makes him so endearing, is his tendency to be frightened easily. When it comes to ghost stories, haunted places and anything that is even remotely suggested to be spooky, he becomes timid and rather cowardly—regardless of how silly his concerns may actually be!

Generally, these moments are played for comedic effect. How Makoto reacts in these situations, however, is strikingly different from how he behaves when faced with his fear of the water/ocean.

One noticeable difference is his desire for physical contact. When struggling with his fear on his own, Makoto tends to distance himself from his friends. Rather than tell his troubles to his teammates, he opts to keep them to himself. In contrast, when Makoto is merely spooked, he seeks out a source of comfort or reassurance.

In the anime, the only exception to this may be the scene in which he grips Haruka's hand as they witness a funeral procession as children. Portraying a grave and somber event, the scene is clearly meant to be more serious than humorous.

However, the scene can also speak to the two's close relationship. Oftentimes, it is Haruka who Makoto chooses as his... er, impromptu meat shield when he is having one of his episodes. During these instances, he tends to latch onto Haruka's clothes or duck behind him.

Although Haruka remains indifferent, not reciprocating the gesture or providing any physical comfort of his own, there is the sense that he understands Makoto's need for it and, thus, allows Makoto to do as he pleases.

Another difference lies in Makoto's facial expressions. When struck by his fear of the water/ocean, his expression is one of horror. There is a clear distress and severity to it that does not manifest when he is just being his "scaredy-cat" self.

During the latter situations, his expression is far more animated and less grim. From gaped mouths to gasps of horror to wild beads of sweat, Makoto's reactions are fairly exaggerated and silly, and are mostly done for the audience's amusement. 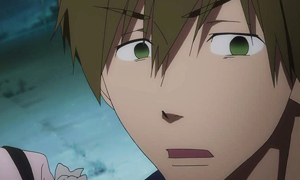 In "Shocking No Breathing!" (1.06), both the "fearful" and "timid" aspects of his personality are shown, though there more of the former than of the latter.

Following their jeopardizing experience in the ocean, Makoto and the others decide to seek shelter in an old rest house. Before entering the dubious-looking structure, Haruka tries to scare Nagisa by pretending to see a "shadow" nearby. However, he only manages to frighten Makoto (and, perhaps, Rei). While inside, Makoto only continues to be uneasy about the creepy place they're in.

The following is a brief compilation of screencaps from the episode, highlighting the differences discussed previously. At a glance, it should hopefully be easy to tell when Makoto is fearful versus when he is just being a little unnerved. (If not, hover over the images to see my captions, hehe.)

Given the general seriousness of the episode, the appearance of "scaredy-cat" Makoto is most likely done for comedic relief. However, the presence of this Makoto also emphasizes the gravity of his fear towards the water/ocean. By showing both of these facets of his personality, viewers are able to see the nuances in his behavior, and can see how his reactions change depending on the sort of situation he is in.

In the end, Makoto's easily scared nature adds a certain dimension to his character, acting as a unique character quirk while also being quite adorable and entertaining to watch!